Gaspard Lantier and his brother Ozée (featured in the preceding article of this series) were born to Catherine Lalonde (b.1799), wife of Jean Baptiste Lantier (1794-1844).  Catherine, in turn, was a direct descendant of three survivors of one of the most infamous incidents of the so-called “French and Indian Wars”, the Deerfield Massacre. Each of these ancestors was taken captive as a child by the French and their Iroquois allies, marched north to in the bitter cold of winter and raised by Mohawks (the eastern-most tribe of the Iroquois Confederacy). A surviving brother of one of the three was killed in a later raid, an account of which by Lucy Terry (c. 1730–1821) holds its own place in history as the oldest known work of literature by an African American.

The “French and Indian Wars”, as they are referred to in the U.S., were a series of conflicts lasting 74 years and referred to by a number of different names in Canada and Europe. As the French and British colonies expanded into the interior of , the French and their native allies from numerous tribes conducted on-going raids on frontier communities.

Taking captives, mostly women and children, back to was a common practice of the Indians.  Many prisoners would die en route, succumbing to exposure or slain by their captors. Others would be eventually turned over to the French colonial authorities to be either sold into domestic service or ransomed back to the New Englanders. Still others would be adopted into the tribes and remain by choice in native communities for the rest of their lives. 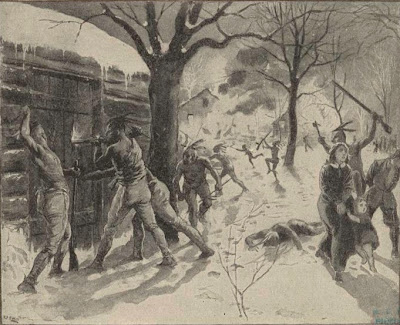 Deerfield was an English settlement in the Connecticut River valley in western , established in the early 1670s, and had a population of close to 260 by the turn of the century.  Just before dawn on February 29, 1704 raiders swept into town, killing many dozens of residents, burning most of the buildings and taking over 100 captives.

The raid has been immortalized through many accounts, most notably the 1707 memoir of captive Rev. John Williams, The Redeemed Captive. A portion of the original village has been preserved as a living history museum and is today a popular tourist attraction.
Josiah (Joseph) Rising and Abigail Nims

Abigail Nims was 3 years old at the time of the raid. Josiah Rising was 10. Abigail was the daughter of Mehitable Smead and Godfroi (Godfrey) de Nismes, a French Huguenot. Josiah was the son of John Rising and Sarah Hale of .  With spectacularly unlucky timing, John had sent his son to visit his maternal grandparents in shortly before the attack. Both children found themselves on their way to shortly after sunrise that February morning.  Neighbouring villagers pursued the invaders but were unsuccessful.
﻿﻿
﻿﻿

The Nims’ home in had been burned along with three small girls. Abigail’s brother Henry and sister Rebecca were also killed in the attack. Her mother Mehitable and a brother Ebenezer were taken captive with her, but Mehitable was one of twelve prisoners who died on the journey to .

Once in , Abigail was entrusted to an Iroquois woman, and Josiah lived with his captor.  Both were adopted into the tribe and given Iroquois names. “Shonatakak’ani” (“he was taken in his village”) for Josiah, and “T’atog’ach” (“she withdrew from the water”) for Abigail. The tribe was already Christian, but the Catholic priests of St. Sulpice considered two baptisms (that of the Indians and the Protestant one in ) insufficient and baptized them for a third time in June 1704.  Josiah Rising was now “Ignace Raizenne” and Abigail “Marie Elisabeth Nims”.

An attempt was made to ransom them in 1712 but they were not released. Abigail’s brother and his wife and son were freed. Abigail and Josiah both ended up in the Catholic mission at Sault-au-Recollet where in 1715, with Josiah aged 21 and Abigail 15, they were married.  At this time they each renounced their heritage and chose to live as Mohawks, moving to the village at in 1721 when the mission moved there.  Abigail and Josiah had two sons and six daughters, one of whom, Marie Anne Raizenne, was a maternal-side Great Grandmother to Catherine Lalonde, wife of Gaspard Lantier.
Sarah Allen
Sarah Allen (1692-1764) lived in and was only 12 years old in 1704 when the settlement was attacked.  Sarah was a third generation New Englander with family roots in . Young Sarah was marched north with the other prisoners, arriving at in April 1704.

The next record of her is a re-baptism as a Catholic on May 3, 1705 at Ste-Anne de Bout de L’Ile, having been sold into domestic servitude to a merchant named Jean Quenet.  When she reached the age of 16, as Marie Madeleine Helene Sire, she was granted citizenship in and married Guillaume Lalonde, son of Jean Lalonde and Marie Barbant.

She died in 1764 after raising nine sons and four daughters in the region of les Cedres, .  Gaspard Lantier’s wife Catherine Lalonde was Grand-Daughter (on her father’s side) of Sarah’s son Albert.

Lucy Terry is the author of the oldest known work of literature by an African American.  According to Wikipedia,

“Terry was stolen from and sold into slavery as an infant. She was owned by Ebenezer Wells of . Her work, "Bars Fight", is a ballad about the attack upon two white families by Native Americans on August 25, 1746. The attack occurred in an area of called "The Bars", which was a colonial term for a meadow. The poem was preserved orally until it was finally published in 1855.”

Samuel Allen was the younger brother of Sarah and survived the original Deerfield Massacre in which their parents were killed and Sarah captured. He was 2 years old at the time.

Terry’s poem describes the now 44-year-old Samuel's fatal fight to defend his children including Samuel Jr. who was captured and taken to , and his daughter Eunice, "tommyhawked..on her head and left...on the ground for dead."

The group of villagers was haymaking in the meadow when they were attacked by Indians who had been laying in wait. Many of the children escaped due to the defending actions of their parents. Four men, including Samuel Allen, and a boy were killed. Samuel Jr. was captured and daughter Eunice wounded. According to various accounts, Eunice fell in fright while running to make her escape after being narrowly missed by a pursuer’s gunshot. The Indian then overtook her and buried his tomahawk in her head and left her.  She did survive and live a long life. Samuel Jr. remained with the Indians for close to two years before he was recovered by Colonel John Hawks.  He apparently refused to speak English to Colonel Hawks, pretending to have forgotten it, and resisted leaving the Indians. He is said to have asserted to the day of his death that his Indian mode of life was his happiest.

As Sarah’s brother, Samuel Allen, the first principal subject of the poem, would be a Great Uncle many times removed to all the Lanthier descendants from Gaspard on down.

August, 'twas the twenty-fifth,
Seventeen houndred forty-six,
The Indians did in ambush lay,
Some very valiant men to slay.
' Twas nigh unto Sam Dickinson's mill,
The Indians there five men did kill.
The names of whom I'll not leave out,
Samuel Allen like a hero foute,
And though he was so brave and bold,
His face no more shall we behold.
Eleazer Hawks was killed outright,
Before he had time to fight,
Before he did the Indians see,
Was shot and killed immediately.
Oliver Amsden he was slain,
Which caused his friends much grief pain.
Simeon Amsden they found dead
Not many rods from Oliver's head.
Adonijah Gillett, we do hear,
Did lose his life which was so dear,
John Sadler fled across the water,
And thus escaped the dreadful slaughter.
Eunice Allen see the Indians comeing
And hoped to save herself by running;
And had not her petticoats stopt her,
The awful creatures had not cotched her,
Nor tommyhawked her on the head,
And left her on the ground for dead.
Young Samuel Allen, Oh! lack-a-day!
Was taken and carried to .

Return to :
The Struggle for a Continent, Francis Parkman, 1902, (obtained via Wikipedia) 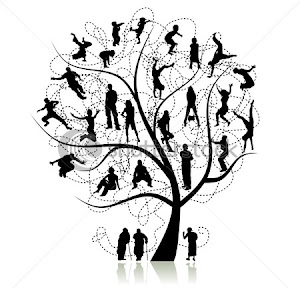